The Primitives gave a more accurate indication of the group's brand of long- haired , Pretty Things-styled driving R&B under their new name, they signed to Pye in autumn 1964.

"Help Me" failed to click, as did the even more frenetic Eaton/Tindall composition "You Said" (b/w "How Do You Feel"), released a couple of months later in January 1965 boasting the input of Jimmy Page. 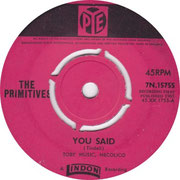 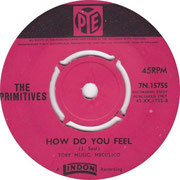