Jimmy Page's work as a session guitarist has been scrutinized and analyzed, disputed and upheld in every which way, but none so much as his work with British Invasion pioneers The Kinks.

It is undisputed that Jimmy Page played with The Kinks in the studio, what is disputed is what he actually played on.

Much of the debate centers on one recording in particular, The Kinks' breakout hit, "You Really Got Me".

Despite all the rumors and legends that Jimmy played the lead and iconic solo on the track, I'm here to tell you, it didn't happen.

According to Shel Talmy, The Kinks' producer, "Jimmy did play rhythm on the first Kinks LP, and certainly did not play lead on "You Really Got Me", which preceded the LP by several weeks, or anything else for that matter. I only brought him in to play rhythm because at the time, Ray wanted to concentrate om his singing." Page himself echoed Talmy's assertion in a later interview, "Concerning the Kinks' work, though, and looking at it in retrospect, my presence at their sessions was to enable Ray Davies to wander around and virtually maintain control of everything, without having to be down in the studio all the time. Ray was producing those songs as much as Shel Talmy was . . . more so actually because Ray was directing them and everything. At one point, there were even three guitars playing the same riff."

No doubt feeling like much of their acclaim for their efforts was being taken away, The Kinks' leader, Ray Davies would himself weigh in on the controversy in defense of himself and his brother with some pointed comments, "Dave Davies is a good guitar player and he played the solos on all our records. Jimmy Page played tambourine on “Long Tall Shorty” because he came into the studio as a friend of Shel Talmy's. [...] Dave Davies did all those solos and Dave started that sound. The take of "You Really Got Me" that was actually released was the third take -- there was a demo thing with Dave playing lead, a second cut which may have had Jimmy Page on it (and which Pye Records still have in their vaults) and a third which definitely had Dave on it. I know because I was standing right next to him when he played on it. And that's the one which was released. Jimmy Page did play tambourine on our first album. It's very good tambourine and he's a very good musician. I'd use him if I was producing a record."

In another interview with "Creem Magazine", Ray Davies, went a little further with his thoughts, "I'll tell you something about Jimmy Page. Jimmy Page thinks he was the first person in the world to ever put a B string where a G string should be. And for me, that's his only claim to fame. Other than that, I think he's an asshole... Jimmy Page and a lot of other people subsequently came to our sessions when we became hot, and I think he played rhythm 12-string on "I'm A Lover, Not A Fighter", and he played tambourine on "Long Tall Shorty". The curious thing is I wrote a song called "Revenge" which had a riff like "You Really Got Me". Our publisher at the time was a man named Larry Page. To get a part of the action—this was a real con trick—he registered the song as a co-composer, and he wasn't even on the session for the demo. So maybe the fact that Larry Page was credited as co-composer of Revenge" adds some substantial evidence to Jimmy Page's claim.

"I remember Page coming to one of our sessions when we were recording "All Day And All Of The Night". We had to record that song at 10 o'clock in the morning because we had a gig that night. It was done in three hours. Page was doing a session in the other studio, and he came in to hear Dave's solo, and he laughed and he snickered. And now he says that he played it! So I think he's an asshole, and he can put all the curse she wants on me because I know I'm right and he's wrong. He's an asshole. Dave is a great guitar player. He's got his limitations, but he's never been given justice for doing that. He made that when he was 16-years-old. He created a sound, and after that came Jimi Hendrix and all the fuzz boxes."

Jimmy, was shown Davies comments and issued this response, "Ray Davies said things like "He wasn't anywhere near our sessions, he played tambourine." I never played tambourine on the damned records, I played guitar. But I didn't play on "You Really Got Me," and that's what pisses him off, so he uses that as his main contention. ... I played on the subsequent records."

Jimmy would go on to clarify, " I didn't really do that much on the Kinks' records. I know I managed to get a couple of riffs in on their album but I can't really remember. I know that Ray didn't really approve of my presence. The Kinks just didn't want me around when they were recording. It was Shel Talmy's idea. One aspect of being in the studio while potential hits were being made was the press -- too many writers were making a big fuss about the use of session men. Obviously I wasn't saying anything to the press but it just leaked out . . . and that sort of thing often led to considerable bad feeling."

In the end what can be gathered from all the back and forth, he said she said is that Jimmy did not play on "You Really Got Me", and was not present for that session. However, he was present for the sessions to record The Kinks' self titled debut LP, and did contribute rhythm backing guitar parts across a number of songs on the record. Unfortunately, which specific songs on the album Jimmy appeared on are lost to history.

(thank you very much Corbin, GL) 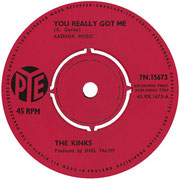 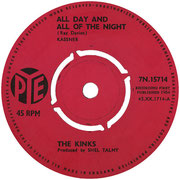 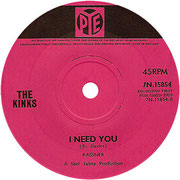 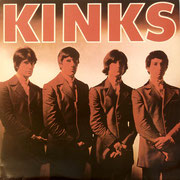