Jimmy Page uses for the first time a Roger Mayer fuzz box in a January 15, 1965 session in London, playing on two tracks for the Manish Boys, an early David Bowie band, back when he was just 17 and known as David Jones.

Bowie and others have stated that Page just got this new fuzz box at the time, indicating that the hand made fuzz effect Page asked Roger Mayer to create for him in mid to late 1964 was finished at this time.

Here is a quote from Bowie on the session:

"When I was a baby, I did a rock session with one of the bands, one of the millions of bands that I had in the '60s – it was the Manish Boys, that's what it was – and the session guitar player doing the solo was this young kid who'd just come out of art school and was already a top session man, Jimmy Page.

And he just got a fuzz box and he used that for the solo.

He was wildly excited about it, and he was quite generous that day and he said "Look, I've got this riff but I'm not using it for anything so why don't you learn it and see if you can do anything with it."

So I had his riff and I've used it ever since [laughs]. It's never let me down."

Bowie did use the riff for The Supermen on his third album The Man Who Sold The World, then again in 1997 in the song Dead Man Walking from his Earthling album.

Reportedly the band rehearsed the song "I Pity The Fool " (written by Bowie) at a coffee bar before the session, where they were introduced to Page, who was scheduled to play on the session.

Page mentioned he was bringing his "brand new fuzz box" to the session. 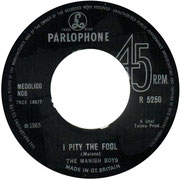 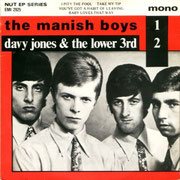