The Factotums were formed from two groups who were all pupils at Audenshaw Grammar School and the members were Nidge Thomas, Jeff Lees, Ian Thornton and Steve Knowles.

Initially, in common with a lot of groups at that time, the emphasis was on instrumental tunes like The Shadows, The Ventures and other groups of that style but in 1963 the trend changed and there was a big rise in vocal groups performing a mixture of rock and R & B songs of the fifties.

It was decided that this was the direction that the group would take.

The signing to Andrew Oldham boosted the fee for new sessions.

“You’re So Good To Me”, “Bye, Bye Love” and the Denny Gerrard composition “Can’t Go Home Anymore My Love” where Jimmy Page laid down a 12 string guitar fill. 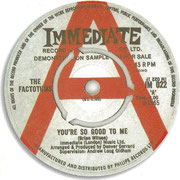