The Beat Chics, a british All-Girl Group with all members in their twenties were active in the years 1963 – 1967.

All are professional musicians, who can read, write and score music.

Many people have assumed that the B-side writing credit was a reference to Jimmy Page, but it could be that the songwriter was actually Moira "Moy" Page, who was a member of the group. 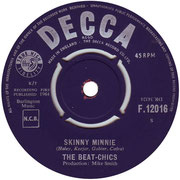 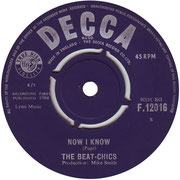